Moonshine Volume 1 by Azzarello and Risso

With Moonshine, Azzarello mines the rich lore of 1930s prohibition era america with trademark grit and violence. The story can feel somewhat confusing at times as hillbillies fight gangsters and werewolves stalk G-men. But at the heart of it is the slow unraveling of a big City mob crony completely out of his element in Appalachia. 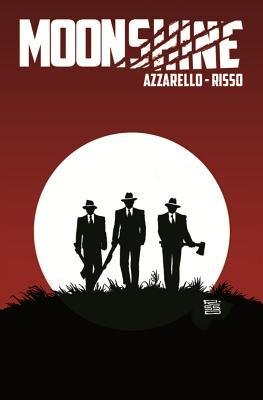 Story: Lou is a handsome smooth talker sent by his New Jersey mob boss to broker a deal to bring high quality moonshine to New York speakeasies. But things aren’t as straightforward as they seem and Lou soon finds himself irrevocably trapped in an ever devolving nightmare of alcohol, sex, violence, and horror. Something is very wrong in the Virginia backwoods – and he’s walked willingly into the middle of it.

The story is dark, as would be expected of an Azzarello title. Lou is pretty much a nuanced and conflicted character that feels very authentic to the era. He’s neither good nor evil, reprehensible nor pardonable. As the story unfolds, his complete debasement is both startling and fascinating – a car wreck you can’t turn away from as you pass. This isn’t an anachronistic retelling of the jazz era; rather, Azzarello stays true to the period in nearly every way – from the dialogue to the art.

There is true mastery here of design in each of the panels. The perspectives well thought out, creative, and effective in building a sense of dread and hopelessness. Because the story takes so many unexpected turns, readers could have become very lost. But that never happens in Moonshine, a true testament to an artist at the top of his game.

So much happens in this first book that it almost feels like a complete book in itself. But really we only have an introduction and that’s important to remember or it will feel like too much is going on and the book lacks focus. But I am expecting Azzarello has the big picture well in hand and I imagine the next book will be even twistier and consuming. Reviewed from an advance reader copy provided by the publisher.