I’ve seen some interesting comparisons for what you find in Zero Repeat Forever – from a “Canadian 5th Wave” to “Alien Warm Bodies.” And certainly, the plot does echo what is found in those stories: an alien invasion, a girl who has to survive, and a creature that has little control over itself but becomes obsessed with a girl anyway. But where this book shines is in the pathos: Prendergast tells a story that, although not necessarily surprising, is full of nuanced and non-cliche characters. There are no unique snowflakes or Hallmark moments to be found. 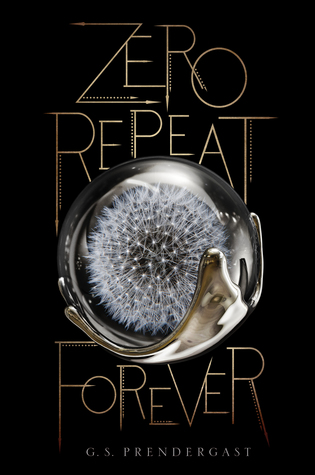 Away at a remote Canadian forest camp awaiting the arrival of the students they have to watch, Raven and her teen counselor friends are horrified to learn that an alien invasion is occurring – and people are dying en masse. Trapped, unsure of where to go and what to do, with supplies dwindling, the teens are going to have to figure out what to do when survival is becoming increasingly difficult. Meanwhile, a member of the invasion force, Eighth, is killing humans as directed but increasingly realizing he is defective. Conflicted, Unsure, and unable to process and even hide his defectiveness, he will be driven to desperation when he allows a single human girl to escape – and realizes he no longer has the will to kill the humans.

The story is not a soppy sci fi romance nor is it silly YA instalove. What we have is a bleak but also character driven survival tale with a very beating heart at the center. Raven, the female protagonist, has a checkered past and is stuck at a Summer camp to make up for her misdeeds. She’s there with her boyfriend Tucker and his twin Topher. Eight, meanwhile, wants only to follow his Sixth – the female who gives him orders – but she despises him for his weaknesses and ‘defectiveness’ in not following the directive completely. She is lethal, unequivocal, and he knows only that she is the most important thing in his life. His agonizing over the free will thoughts that make him ‘defective’ are what drive most of his narrative. Eighth’s POVs are brief but poignant; full of self loathing and confusion. Raven’s are also conflicted: surviving, dealing with the death of her friends and family, yet full of fire and desire to live.

By the end, these very flawed characters will have gone through great trials but also great growth. Both Raven and Eighth have much to learn about themselves; through their interactions with each other, they come to individual catharsis that are quite grounded yet also very emotional.

There is a lot of action but also a lot of harshness. Prendergast doesn’t spare the readers and so for that reason, I reminded a lot of what made Hunger Games so good – there’s so many small moments but also heartbreak and triumph. It’s always a mixed bag. Since this is the first in the series, we are given some ideas of where the story will go but there is still a lot to be answered. The ‘twist’ at the end certainly wasn’t a surprise, especially how the aliens kill the humans. But the book was very well written and kept me reading well into the night. Reviewed from an advance reader copy provided by the publisher.

This entry was posted in ARC, Book Reviews, sci fi, sci-fi, YA. Bookmark the permalink.